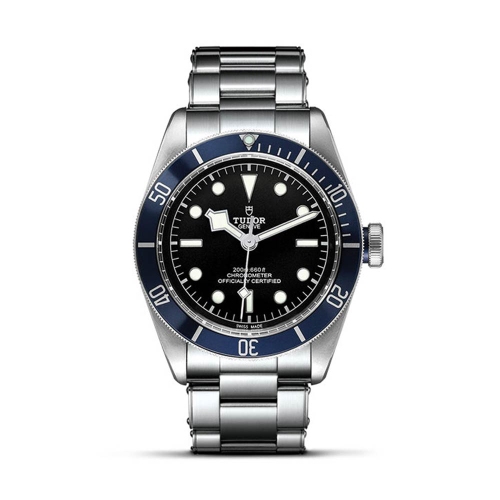 Tudor Black Bay presented for the first time in 2012 and honoured by the jury of the Grand Prix d'Horlogerie in Geneva the following year it has been updated for 2016 with a mechanical movement developed manufactured and assembled in-house by TUDOR. One of the brand's truly iconic models it celebrates 60 years of diving watches with an extraordinary heritage. The characteristic elements of the Black Bay's personality have been drawn from TUDOR's history. It inherits the general lines as well as the domed dial and crystal from the first TUDOR diving watches. It features the particularly prominent winding crown from the famous 7924 reference of 1958 known as the Big Crown. It borrows the characteristic angular hands known as snowflake from the watches delivered in large quantities to the French Navy in the 1970's. The watch has a 41mm stainless steel case with a steel unidirectional bezel with a matt blue bezel insert in adonised aluminium. The Black Bay watch is equipped with a self winding MT5602 movement which is a high-performance calibre of excellent precision and proven robustness it offers a 70-hour power reserve meaning that its' wearer can for example take off the watch on Friday evening and put it on again on Monday morning without having to wind it.This Heritage Black Bay model features a screw down steel winding crown with Tudor rose crown and a black laquered finish with a blue aluminium winding crown tube. This crown contributes to the multi watch features which give it a 200m (600 feet) waterproofness.TUDOR has also reworked the steel bracelet which comes with this model taking inspiration from the brand's riveted bracelets made in the 50s and 60s and has a folding buckle and safety clasp.

All TUDOR watches have a 5 years manufacturers warranty