Join the club
Register below to receive our newsletter with the latest products and exclusive offers.
No Thanks
The store will not work correctly in the case when cookies are disabled.
This website requires cookies to provide all of its features. By using our website, you agree to our use of cookies
ACCEPT
Click & Collect
0% Interest Free Credit
Extended Returns
Next day delivery 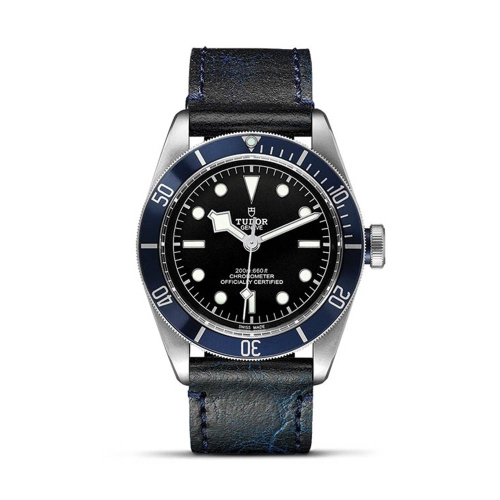 Skip to the beginning of the images gallery
Pay by Finance

Finance Calculation for your £ £ order

The figures shown are an illustration based on the cost of goods. Final details including shipping and discounts where applicable will be displayed on the checkout page.

IMPORTANT: Novuna Capital rounds down the monthly payments, which may result in your total amount payable being less than the total cash price.

Tudor Black Bay presented for the first time in 2012 and honoured by the jury of the Grand Prix d'Horlogerie in Geneva the following year has been updated for 2016 with a mechanical movement developed manufactured and assembled in-house by TUDOR. One of the brand's truly iconic models it celebrates 60 years of diving watches with extraordinary heritage. The characteristic elements of the Heritage Black Bay's personality have been drawn from TUDOR's history. It inherits the general lines as well as the domed dial and crystal from the first TUDOR diving watches. It features the particularly prominent winding crown from the famous 7924 reference of 1958 known as the Big Crown. It borrows the characteristic angular hands known as snowflake from the watches delivered in large quantities to the French Navy in the 1970's. This version of the Black Bay features a blue anodised aluminium unidirectional bezel with a black domed dial . The self winding movement is the COSC certified Calibre MT5602. This watch has a waterproof depth of 200m (660 feet) which still allows it to be used as a divers timepiece. This Black Bay is presented on an aged blue leather strap with folding buckle and safety clasp.

All Tudor watches have a 5 year manufacturers warranty

We want shopping with us to be an enjoyable and relaxing experience, a sentiment we have held for the last 125 years. While our store may have expanded over the years and changed in appearance, our values and warm traditional service have remained the same.